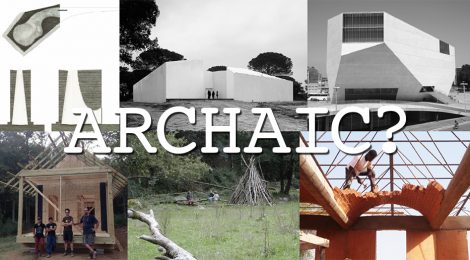 Final Program, English: The potential for the archaic today

This colloquium, organized by the RST PhilAU and the GERPHAU, aims to explore the emergence, perhaps the resurgence, of practices involving recommencing, repetition, and resetting  in the field of architecture, urban planning, landscape. These experiments all share, in spite of the immense differences that separate them, a confidence in these archaic gestures to once again infuse the act of building with meaning and seek references less in the wealth of the learned culture of architecture and the city than in the originary and ahistorical experience of human settlement practices. How to think these emerging figures, how to draw a map? One of the theoretical stakes involved in the colloquium thus consists in better identifying the figures of expression relating to the archaic in contemporary architecture, as well as seeking the more or less conscious patterns of these resurgences.

In order to lend substance to this debate, to map out these initiality experiments and deploy the various meanings they involve, we propose a colloquium at the City of Architecture that will interweave the threads of architecture and philosophy.

This call for papers is addressed to:
– architects, urbanists and landscape designers for whom this notion is invigorating and who wish to present and share their own questions,
– teachers and researchers whose courses and/or research interweave with these initiality experiments,
– philosophers who see in architecture an opportunity to deepen their own thinking about this concept and its relevance.

Please send proposals in French or English for papers maximum 300 words before 31 January 2018 to the following address: gerphau@gmail.com

The conference will be conducted in French or English.

The announcement of the selections by the scientific committee will take place around February 20, 2018. In case of selection of the abstract, the organizing committee will keep the speaker informed of the proposed device for its presentation.

The potential for the archaic today.Symposium Programm pdf