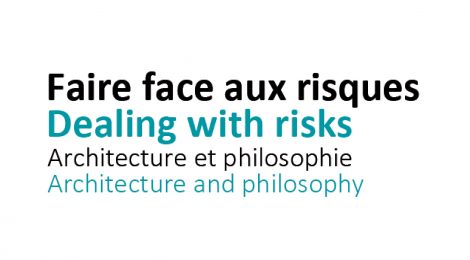 download the call for papers in French and English (PDF)

No one knows what the real consequences for habitat, climate change and the degradation of the biosphere will be in the next fifteen, thirty or fifty years. But the disasters are already there. Whole neighborhoods collapse and their inhabitants are drowned, burned, swept away, suffocated by physical phenomena that clash with human settlements. New threats are intensifying. The recent Covid-19 pandemic also highlights the toxic synergies that are woven between pressures on natural ecosystems, loss of biodiversity in the environment, global warming, emergence of new viruses, and the fragility of human organizations.
So, lifestyles, but also local implementations must be rethought, put back to work, without waiting for the extension and intensification of the cataclysms.
This conference will aim to take stock of the complex and disturbing naturo-cultural dynamics, which destroy the very habitability of the planet, in order to promote what they engage in return as renewed cultures of architectural and urban planning and design.
In addition to the already very extensive range of risks, and which is constantly widening, we may have to face the business-as-usual post-pandemic activities, which would express our collective inability to get out of the repetition of a model that has already demonstrated its catastrophic horizon.
How to initiate a path to something else? What to learn from this high-risk context, from the encounter with these hazards?

So, we have to tackle evolutionary, cyclical situations as well as their representations, put into discussion new practices (as constructive as conceptual), within the framework of a specific meeting between architecture and philosophy.
This symposium, carried out by the GERPHAU laboratory from the Ecole nationale supérieure d’architecture de Paris la Villette and the European research network ARENA, aims to highlight the potential of architecture in such a context.

Three areas to explore, between architecture and philosophy

The different panels of the symposium will bring together the power of intelligibility of philosophy and the capacity for concrete architecture. Three areas of reflection and practice are open to contribution.

To build from shared vulnerabilities

Natural, climatic and health disasters reveal the fragility of human settlements. They commit us to think about the constitutive vulnerability of humans, constructions, societies, ecosystems, with, among other things, the precious contributions of care philosophies.

This risk context shows that the level of installation power mobilized does not protect us against embrittlement. It is therefore appropriate to question what might appear paradoxical at first sight in architecture: the (defensive) consolidation of certain aspects of our human settlements must go hand in hand with new relationships with the inconstructible, the unavailable, the open, which have always been part of the expectation horizon of architecture.

Starting from a shared ethics of vulnerability, values such as conviviality and solidarity are then active to rethink and build places and environments.

Debating other settlements figures and stories

Architecture in a single gesture is buildings and texts: the forms and discourses produced are addressed to the past, to the present, to the future. But in the light of the risks which multiply and intensify, the progressive relation to the future which had marked the previous centuries is no longer appropriate. Given the scale of the upheavals (climatic, social, political, ecosystem), new stories (such as the writings of eco-feminists for example) are stated with a radicalism commensurate with the threats involved. New ways of inhabiting the earth, and making use of the world are becoming clearer whose architecture is the crucible and sometimes the engine.

Document the collapses, prepare the refoundations

What is epoch-making today undoubtedly lies in the global and interrelated dimension of the risks which destabilize, over disasters, the basic conditions of habitability of the Earth system. It will therefore be a question of talking about collapse and also of new beginnings, of refoundations, through the presentation of interventions, aesthetic territories, theoretical hypotheses that emerge in philosophy, architecture and town planning, allowing to reinstall the long time , since the ordeal of disasters and distress. How do we shape and prepare for refoundations? What support points can be found to rebuild? What ideas, what values do existential philosophies propose, to reconstruct balance, even harmony?

These three themes of intervention in the face of risks may give rise to contributions which, emerging from the specific fields of action of their authors (architecture, town planning, landscape, philosophy), will participate in the shared invention of other ways of thinking and building.

The proposed interventions will also aim to present the unprecedented action potentials of architecture, as well as the theoretical issues that arise from this proximity to risks.

Architecture as a preliminary clinic for future “open shelters”

In addition to concrete functional responses to natural hazards, architecture also introduces new methods of setting up and meeting people in the world.
In a context of risk, it intervenes in several directions, consolidating the capacity to protect private and collective spaces, strengthening the urbanity of shared common spaces, but also establishing an open relationship in the distance, the horizon, when not accessible. The potentials (social, cultural, perceptual) of these three overlapping scales, then initiate a reflection on the concept of “open shelters”, whose symposium will aim to deploy all the formal and theoretical wealth.

This conference aims to work on the paradoxical situations linked to the propagation and intensification of risk situations. The threats of destruction of the superior forces requires weaving several types of actions, from new thought patterns.

In parallel with talks based on confrontation (which remain useful in places), it is also necessary to implement (with the elements, non-human living things, elements of the terrestrial landscape, ecosystems), modalities of exchanges and nondominating and non-instrumental encounters.

Interventions will therefore be able to highlight how architecture makes possible new dialogues between competence of actions and capacity to meet (of oneself, of others, of the world), reinstating imaginaries and esthetics of cohabitation.

This call for papers is addressed to:
– architects, urbanists and landscape designers challenged by these subjects and who wish to present and share their own questions,
– teachers and researchers whose courses and/or research interweave with these experiments,
– philosophers who see in architecture an opportunity to deepen their own thinking about these concepts and their relevance.