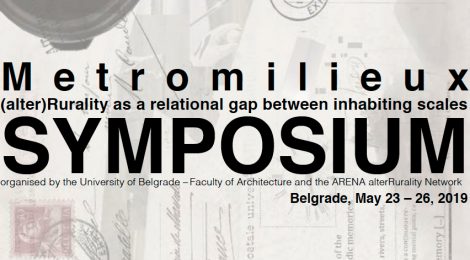 (alter)Rurality as a relational gap between inhabiting scales

The contemporary notion of rurality is tensioned between intelligences of autonomy and networking. Rural space is disposing stability in terms of specific economical units – from household to local community, closely networked in the nexus of rural environment. On the other hand, rural space is connected to numerous economical, socio-political and cultural relations to urban conditions, both considered necessary and more and more endured as constraints. This tension is ambiguous – simultaneously problematic and nourishing for rural life modalities. It results in peculiar mechanisms and procedures inherent to situations of in-betweens – often of largely understated importance, such as that of food economy systems entirely disconnected from local stakes.

We are here emphasizing the aspect of economic reasoning on the fringe of two distant scales of inhabited environment – connected to the urban in the sense of a metropolitan inscription in global economy and local with the connotation of ambiental rooting. The metropolis, etymologically a mother-city, is one of problematic contemporary connotations: of size, of polarity, of exemplarity, single unit of global financial economic and political power. The metropolis of today tends to substitute itself to the welfare-state in an unprecedented neo-liberal growth race. It has annexed, absorbed rural space, nature, and the entire biosphere as its economic, political and socio-cultural sub-system. Rural space has become a resource landscape for urban use within metropolitan/global economical growth purposes: a space providing production of consumables and energy, housing, leisure and holiday resort, depository of pollution, waste and rejections (Guillot/Versteegh).

Rather than opposing two scales (in their geographic meaning of qualities) of inhabited environments in a binary lock-in inevitably returning to this predominant figure of rural resource landscape, we introduce the notion of metromilieu, let us say metro-environment in English. The stronger French term metromilieu, by is pleonastic character, emphasizes its etymological meaning of a motherly, uterine space or environment. It opposes the predatory polarity of the metropole competing for global productive power and suggests a smoother continuity of connectedness – always umbilically related to earth as a complex finite motherly state of precarious nature sustained by collaboration and surrounded by care. A metromilieu is an environment that houses scales of locally rooted, bottom-up phenomena of resilience, giving them meaning within a new global economic construct – searching global compatibility without giving away to global neoliberal growth economy.

Through the notion of Metromilieu or Metroenvironment we want to invest the current relational gap between inhabiting scales while giving it a globally compatible and holistically constructed identity. Within a school of architecture, this means that the ancient paradigm of the house on a site, of the city in a landscape needs to be deconstructed, that a new paradigm needs to be constructed from a holistic, that is a broad interdisciplinary field.

Four sub-themes will be developed by guest key-note workshop and/or round table leaders:

This event seeks to invent new forms of collaboration connecting research, teaching and practice, locally and internationally, engaging 2nd and 3rd cycle studies. Whereas in architecture the contributions of “other” disciplines are often viewed as peri-disciplinary services, we will explore a reversed interdisciplinary approach where the “other” discipline takes a central position.

The call for participants is open to students, researchers and practitioners of any discipline feeling related to the theme of the event. Participation proposals (abstracts) should state a research intention or subject and should explicitly develop how/why they respond to the main theme and one of the sub-themes.

Organisers reserve the right to alter sub-themes or sub-theme distribution of if needed for logistic reasons.