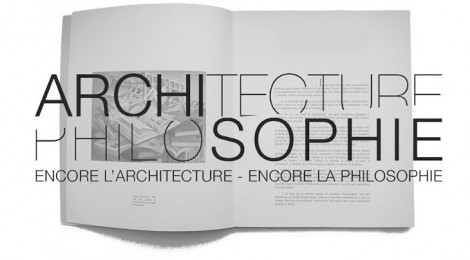 This conference is the first ARENA conference (Architectural Research European Network Association), a shared platform that aims to promote, support, develop and disseminate high-quality research in all fields of architecture in the widest sense. The network already includes researchers from leading European
architecture schools.

The objective of this conference is to restate and refresh the question of the meeting of architecture and philosophy, by asking: what still remains today of our cross-over practices? The different conference partners share the view that such a broad and rich topic can best be treated in two stages; a conference in two acts. The first stage will take place on 19th and 20th March 2015 at the Cité de l’Architecture et du Patrimoine in Paris. This opening act will be an occasion to bring together a group of speakers who will work together to define and strengthen the multiple challenges presented by the subject. Then, and already in planning for late-2015, the second stage will be build upon an international call for papers in order to present the emerging concepts to a broader audience.
The idea of a conference carried out in two acts also attests to our desire to develop new configurations of debate and to experiment with an alternative apparatus for knowledge production.

The call for papers of act I is addressed to all researchers, teachers and practitioners whose work is – or has been – confronted to the question of what future for our architectural and philosophical disciplines, but also for urbanism, geography, sociology and others from ecological and environmental approaches. The objective of this first meeting is to co-construct an overview (“état des lieux”) of different challenges facing up to our practices.

An abstract of your paper (3000 characters, including spaces) has to be sent before 19th January 2015 to colloqueGERPHAU@gmail.com
As far as we encourage innovative presentation frameworks, we highly recommend participants to add a few lines to specify what kind of configuration their paper could imply.

Selection of abstracts by the scientific committee will be announced in the second week of February. In case your abstract has been selected, the coordination committee will keep you informed about the frame proposed for your paper.

The conference will be conducted in French, but English papers are more than welcome.

See also www.archiphilo.eu or the Call for Papers in PDF format

from 1985 to 2015, an overview of our pratices.
In Paris in 1987, a first event was held to celebrate the meeting of two disciplinary fields, entitled “Mesure pour mesure, architecture et philosophie”. Architects and philosophers were invited to discuss together how philosophy could capture better what determines architecture itself. Now, on the occasion of a new
international conference, the GERPHAU Lab seeks to restate and refresh the question of the meeting of architecture and philosophy, by asking: what still remains today of our cross-over practices?

ENCORE L’ARCHITECTURE, ENCORE LA PHILOSOPHIE.
To build together these reflections about the future of our respective practices, why don’t we hold to the hypothesis that our recent histories, in architecture as well as philosophy, could be written through the addition of a few prefixes?

In linguistics, a prefix does not only serve the formation of a new word: it also regenerates the question of the meaning of the word. It is a discursive invention and its real strength lies in its ability to engage a new type of relationship with the world. Re-, alter-, eco-, co-, bio-, etc., these prefixes have clung to both our
discourses as well as our disciplines. But in what way do they question the meaning of our practices? In archi-tecture as in philo-sophy, how do these successive re-definitions put the fundamentals into question, and how do they disturb their alleged unity inherited from Ancient Greece? And, moreover, how does the over-use of prefixes help us to understand what still makes sense in philosophy, or what still makes sense in architecture? The key issue of this conference, ‘Encore l’architecture, Encore la philosophie’, will be to trace backwards the stream of architectural and philosophical ideas through the thematic of the prefix as constituting a form of narrative. The conference will aim to trace the paths of their development, and other influencing factors, so as to return to those meetings between architecture and philosophy which already have oriented, re-oriented and sometimes dis-oriented our speech. It will be a meeting at which we invite participants to retell the story of our disciplines in order to grasp what it is still unique today about our practices.

Four thematic sessions will be held over the two days of the conference. First of all, the opening theme will establish the basis for the subsequent discussions: of what stories are we talking about? How can we explain the shifts of architectural and philosophical topics by using a range of prefixes as our hypothesis? Following that, the sessions will be about questioning the outcomes of these re-stories; what concepts can emerge with the use of prefixes as new narrative pretexts? These parts of the conference debates will be arranged around three distinct thematics: the fundamentals and resistances of our practices; the measure of the splits involved; and finally the contemporary reversal in the use of prefixes.

stories through prefixes.
In architecture, we can consider the 1980s to be a starting point – with a breathless modernity as the context – in the search for novelties which led to the discovery of the prefixes de- and dis- as an opportunity to reinvent itself. Architecture became embroiled in the experimental fields of disjunction and deconstruction; sometimes lending itself to the privative a-, or to the an- of absence, or even more to lose itself in the antiand
con-, which displayed their denial of the excesses of the discipline. By the 1990s, following on from these precedents of breaking up the discipline through prefixes, and upon the ruins of their overexposed violence, some reconciliatory efforts were initiated. Encounters between disciplines that were traditionally
apart were incited, and the hybridisation of knowledge was invited by the events of using trans- and inter-. Architectural skills became mixed and its styles tangled. It was realised that architecture shapes experiences itself, encouraged indeed now by an unbounded frenzy arising from digital sets and other e-possibilities. The art of building has made a prominent numerical entrance into the twenty-first century. It has become the hyper- of excessiveness; it is an architecture that is out of all moderation.
But in the wake of these technical and technological delusions, the discipline finds itself with an unpleasant hangover. The awakening of the environmental crisis has been painful to watch. Architecture, prevented by its inertia to change, is now struggling to re-find itself within a re-definition of the relation of mankind to the world. Now, as a withdrawal from the recurring tendency to label, a re-architecture is being organized around the re-cycling of its ways of doing. The discipline is being re-positioned onto itself in order to question the effects of what it has been producing. Beyond such attempts to re-find itself, the art of
construction is also seeking to re-invent itself: it wishes to build a new kind of being and doing, believing in the otherness of an alter-architecture. It is as if architecture – as well as many other disciplines around – while taking on the game of reinvention, did not take into account the real challenge not only to re-do itself, but especially to re-do itself alone. Without ever ceasing to believe in the promise of possibilities opened up by the term alter-, architecture now has to accept that any alter-achievement can only come to exist by a doing together. This is the co- of co-construction, of co-production, and perhaps soon also the prescription of co-architecture. But however stimulating such an ambition might be, the burden remains a heavy one to carry.

In philosophy, we can consider that the story began sooner – in 1960, maybe, with the emerging concept of eco-sophy in the work of the Norwegian philosopher, Arne Næss. But such speculation about the eco- as a new ethical motor was particularly promoted by Félix Guattari at the end of the 1980s, being spread through his book on The Three Ecologies. This created a forced reconciliation for brand new worldly wisdom and environmental awareness which today is being pursued through other prefixes, such as bio-sophy or geo-sophy. Nevertheless, these calls for a revision of our relationships to different aspects of life are not to be confused with the concept of geo-philosophy as stated in Qu’est-ce que la philosophie? by Deleuze and Guattari in 1991. Their geo-approach towards philosophy attempted to extract the discipline from the abstractions of its history and to (re)connect it to its geographical roots. But what was their purpose? If geophilosophy aimed to highlight the aesthetic and political issues of every philosophical practice, such a disciplinary reinvention was intended as the answer to what?

In a similar vein, we can also find some non-, anti-, alter- and other slightly phobo-sophical adventure stories, but still there remains the question of from what (or from who) these various prefixes are attempting to free themselves? This track of a syntactical history seems less obvious to follow up in philosophy than in architecture, but is no less present. What do these silences and absences tell about what the discipline of philosophy still tries to resist?

the fundamentals.
Re-writing histories of architecture and philosophy through a few prefixes also serves to question the common root of all the hybrid words that have been forcedly formed. It involves questioning an idea of architecture laid bare: what still remains from architecture in itself and by itself? And, likewise, what still
remains from philosophy in itself and by itself? Under the guise of examining the successive affixes that cross-over between our discourses, the conference on “Encore l’architecture, encore la philosophie” presents an opportunity to reconsider what still resists.

These re-writing exercises also offer a kind of pretext to re-read the evolution of our relationship with the world and its various crises. Prefixes get mixed up with our practices at very precise moments of their own development, such as in the form of a support to overcome an obstacle. But what obstacles are we talking about? What sorts of events encourage the emergence of syntactic renewal? By considering prefixes to be supports which are shaped to reinforce disciplinary fundamentals within a specific context, it means that we can learn from them what exactly this context has been. From these terms, we can restate the question which they have pretended to answer.

the splits.
A prefix is also the opening up of a split; it is a split between fundamentals and their possible renewal. It involves a distancing from the origin, not in order to deny it, but still to place it into question. How does it proceed, and how does it succeed in light of these splits? And what does it split from? One of the purposes of the debate that the conference intends to provoke around disciplinary re-invention is to try to measure the potency of these splits. It is about focusing on what the prefix creates and what it rejects in the aim of creating. What does the split leave behind?

the shared limits.
At certain points in their respective histories, architecture and philosophy have sometimes followed common syntactic streams. So what happens when the prefix becomes the root?

Against known linguistic rules, the terms eco- and co- now seem to be being used as fundamentals. They are actually asserting themselves as the common origin for disciplinary re-writing. Such a reversal puts in trouble all that we have been used to take for granted – or at least, all of the knowledge we had built up from
a disciplinary sharing is now outdated. This conference offers us the chance to discuss about this condition when prefixes become the rule: how does this changing status impact on the drawing of our disciplinary boundaries?

Call for Papers in PDF format