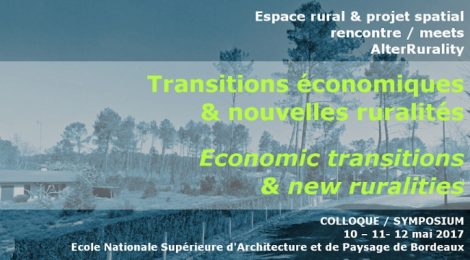 1. Presentation of the academic networks organizing the symposium

The networks ARENA and AlterRurality
ARENA is a European architectural research network. Its aim is to promote, develop and disseminate high-quality research in all fields of architecture in the widest sense, in its practical and theoretical dimensions. Its AlterRurality network questions rurality understood as a body of economic, ecologic, socio-cultural and ethical values. Its hypothesis is that an exploration of these values in a contemporary context contributes to the construct of a sustainable post-urban human habitat. The first event took place in Switzerland in 2012 and has led to a set of aphorisms seen as a framework for the understanding of a new rurality. The second meeting “Re-imagining rurality”, took place in London, in 2014. The third event, called “Futures, opportunities, challenges”, was organised in Spring 2016 in Letterfrack, Ireland. Bordeaux will be the fourth network event. Follow-ups will take place in London and Reading (Summer and Fall 2017), and in Belgrade (Spring 2018).

The network “Rural space & spatial design” (ERPS)
Founded in 2009, from the meeting of several practitioners and academics in the field of architectural design, landscape design and urban planning, the academic network “Espace rural et projet spatial” (Rural space & spatial design) organizes an annual meeting whose objectives are to confront pedagogical approaches, professional practices, and research strategies. After the initial three conferences held in 2009, 2010 and 2011 at the National School of Architecture of Saint Etienne, which determined the working principles of the network and the establishment of an inventory of the research issues common to its members, a series of thematic conferences was engaged, at the National Schools of Architecture of Nancy (2012), Clermont-Ferrand (2013), Rouen (2014), Grenoble (2015), to deepen the working hypotheses raised in these initial conferences. Since January 2015, the Rural Space & Design academic network has been approved as a Réseau scientifique et thématique (Scientific and thematic network) by the Architectural, Urban and Landscape Research Bureau (BRAUP).

2. Rationale of the symposium

The purpose of this symposium is to examine the issues of economic transition in the transformation of rural areas through a multi-scale approach: from architecture to the territory. Nowadays, planning theory and practice (space design and planning) is generally dominated by neoliberal economic thinking, by the concept of growth as the unique answer to improve our environment and quality of life. In this context, the populations of developed countries have organized their life and their settlements with economic rules promoting consumption and overproduction logics. This approach of planning is in total contradiction to the global natural cycles. It has produced the global scale ecological problems we are currently facing, such as loss of biodiversity, global warming, decrease of resources, agricultural and food crises, etc. Despite the multiple “alerts” launched since the 1970s, particularly after the works of the Club of Rome and the Meadows report (“The Limits to Growth”), this logic of growth was never really impeded and questioned. On the contrary, it found a kind of political legitimacy, even ecological virtue, with the promotion of the concept of sustainable development. However, the reality of neoliberal process is that it is a system which runs against the reality of the physical and geographical resources of our planet’s resources. As the economist and member of Attac, Geneviève Azam points out (2010 + p. 11), it is urgent for our society to engage in a transition towards a world which is more sober […] which restores a capacity to act, to have a hold on life, a feeling of belonging in a common world and linked with the Earth “.

Thinking the “chains of transitions”
This symposium aims to question the consequences of this economic path within the context of rural territories and its emerging living practices, and to explore its implications for public policy and professional practices. The point of departure is the observation that rural space is a privileged space for emerging new economies. The publication “18 aphorisms for an AlterRurality” presents a rurality rooted in vernacular and peasant practices of high complexity, and generating lifestyles requiring a holistic understanding. Traditionally and still true today, “Innovative peasantry goes beyond food production: it is about new ways of living and organising society. In Julie Guthman’s ‘Agrarian Dreams’ it is about opening up “an economic space where social divisions can be eroded rather than accentuated”, by “the reworking of nature …, driven by a de-commercialisation of food and land.” […] « a rural economy differs structurally from a global economy: “A certain confusion of production and consumption, of family and workforce, creates an economy of subsistence and of surplus where concepts of salary, capital, revenue, profit have less meaning”. In rural life, values take on different and fluctuating forms, money is sometimes an avoidable means. The economy of the peasant is a moral economy of equilibrium » [James Scott]. (Versteegh, 2015).

Key questions which could be developed are:

Today, these questions echo the debate on the various forms of “transition” (Chabot, 2016) which currently occur in contemporary society. In this case, it is the issue of economic transition” that will be tackled in relation with a “chain of transitions” which today transforms the overall base of space design.

Imagining a new “economic narrative” in the age of energy transition
Since the 1980s, the growth of globalization and “financialization” have increased the power of neoliberal logics and largely contributed to the transformation of urbanization processes towards “metropolisation”. One of the consequences of this logic at the territorial scale is the decrease of the economic vitality of the numerous settlements – small towns and villages – which were not geographically connected to the flows of “metropolisation”. Regarding this issue, one of the main challenges of our time is to curb this huge “expropriation process” which occurred at the territorial scale, in order to rethink the geographical and economic dialectic which yesterday commanded the relation between city and territory. In short, the goal is to show how rural areas and territorial pattern/connection could initiate another type of economic regime/ system, another way of dwelling in the context of “metropolisation”.

The energy transition is another key lever to approach economic transition in terms of dwelling in relation to the territory. Questioning and changing our economic system means reconsidering the evolution of the energy model on which contemporary communities live. As Agnès Sinaï (2015) explains, we cannot separate the process of economic growth from “its” physical and energy substrate. The field of the bio-economy, developed by pioneer works of Nicholas Georgescu-Roegen (1979) and René Passet (1979 ) helps to introduce this link. The bio-economy notion is based on two principles revealing the link between communities, settlements and their economic activities:

Instead of territorial competition pattern based on growth and overproduction, the notion of bio-economy constitutes an opening towards other “economic software” conferring rural territories another role, another status. This notion goes against neoliberal systems of production and consumption by exploring a set of proposals from social and solidarity economy and by contributing to a plural economy (Ndiaye, 2011). At another level, this challenge of the economic transition is an opportunity to imagine a new “economic narrative”, as Eloi Laurent (2016) suggests.

Regarding work engaged by ERPS and Alter-rurality networks, this conference will give an opportunity to review several notions: solidarity and territorial equity (Sery and Saunier, 2016), “city / countryside pact” (Guillot, 2011), identification of an “alter-rurality”, as mentioned by Pieter Versteegh and Chris Younes (2012).

Three sessions are scheduled to explore cultural and spatial potential / levers of economic transition in rural areas. In each session, experiments and/or theoretical approaches developed on a specific geographical scale in relation with other spatial and human scales will be debated. Three geographical scales are proposed:

Session 1 : micro scale. This scale concerns the organisation of home, the domestic space, and the scale of small business. It is linked to economic processes bound to the design and construction of a building. This scale will more specifically focus on short supply chains in implementing buildings, as well as in organising everyday life of their inhabitants. It is linked to the emergence of new economic structures that seek to be close to natural, physical, social and energy.

Session 2 : meso scale. It is the scale of a small community of village or a small town with its nearby network of facilities and services. This scale raises questions regarding town planning regulations and their capacity to integrate specific issues from rural areas and the role of small towns.

Session 3 : macro scale. In the French context, this scale tackles issues regarding the recent regional reform concerns broadened to a new regional scale. Compared with European metropolitan systems, direction and coherence of this macro scale must be constantly renewed. Lower geographical scales and their interdependence with the macro should be considered simultaneously.

Choosing one scale of analysis will not exempt treating its interactions with other layers, in particular by questioning various principles of solidarity (subsidiarity, friendliness) prevailing between actors, bodies and strategies of the various designated spatial categories. Consideration of global scale, such as Gaia, as formulated by Bruno Latour (2015), will be also discussed.

5. Format, selection and publishing of papers

Spatial and economic transitions issues representative of these three design and planning scales, will be discussed by the communications from several professional backgrounds, in order to confront theoretical and practical issues

This call for papers is open to academics: teachers and researchers (from spatial disciplines and from social and life sciences) and PhD students (one session will be dedicated for them) ;

It is also addressed to